About the Wistaria String Quartet 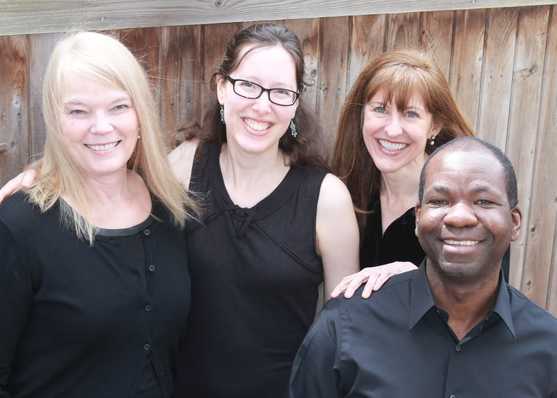 The Wistaria String Quartet formed in 2013 to perform George Crumb’s “Black Angels” and Steve Reich’s “Different Trains” as part of Amherst College’s Copeland Colloquium. Since their inception, they have maintained strong ties to Amherst College, where they frequently perform new works by faculty, students, and alumni.

As local musicians living in the Pioneer Valley, the members of the Quartet — violinists Sarah Briggs and Kaila Graef, violist Delores Thayer, and cellist Wayne Smith — share a deeply-rooted commitment to this area’s communities and people. The Quartet has appeared at venues ranging from Amherst College’s Buckley Recital Hall and the Northampton Academy of Music to less traditional locations such as the Wistariahurst Museum in Holyoke, Greenfield’s Pushkin Gallery, the Montague Bookmill, the Hampshire County Jail, and Northampton’s Interfaith Cot Shelter for the homeless.

In May 2017 the Quartet recorded an album of string quartets by local composer Scott Slapin titled “A Day in the Life of a Freelance String Quartet” and premiered several of his works. Other recent highlights include: the premiere of a work for saxophone, live electronics, and string quartet by Jason Robinson, Amherst College Professor of Jazz and Popular Music; performances in Plainfield’s “Concerts at 7” Series, Springfield’s Tuesday Morning Music Club, the Summit House Sunset Concert Series, and the Hilltown Chautauqua’s Earthcare Festival; and a concert sponsored by Watermelon Wednesdays in which the Quartet performed with Darol Anger’s band “Mr. Sun.”

Through premieres, novel collaborations, and traditional programs in both conventional and rarely-explored settings, the Wistaria String Quartet is excited to share the beauty of chamber music with an ever-growing network of audiences.
Powered by